A comedy writer tells jokes for $1 and earns money

How can a young man make a decent living these days? How about telling some jokes. For a comedy writer who tells jokes for $1 will quip, he is making some money.

Yet another clever way to earn money when jobs are scarce and hard to come by, this stand-up comic has developed a great idea. You want to hear something funny? He sells his jokes to passersby for $1.

People pay him, they laugh. His jokes were tested out in subways and if they make people laugh, he uses them. 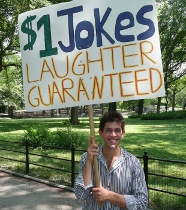 Reports state he earned $140 in his first six hours. He is quickly becoming an internet sensation. Who is laughing now? His jokes make people laugh on the streets, yet he can’t find a job with Comedy Central. Now the 26-year-old comedian earns a little extra income for being creative.

In today’s world, when you can’t get a job, and the unemployment figures are disheartening, you have to find ingenious ways to make ends meet. You can’t give up. You can’t blame others. You just do what you can… to survive.

For comedian Jason Schneider of New York, he’s turning his dreams into a reality. Today a $1 for a joke, perhaps tomorrow he’ll be on Good Morning America.

For more of his story, visit Newslite.tv.

Writer at heart. With faith and understanding, the butterfly represents transformation. I'm in a season of change that has opened my soul to the beauty around me. I'm living my Faith Dream & it's amazing.
View all posts by faithdream »
« “Read a Book Day” – Sept. 6, 2011
Remembering 911 Tributes: My prayer on a day I’ll never forget »