Remembering the Legacy of Maya Angelou With Her Own Words

“We delight in the beauty of the butterfly but rarely admit the changes it has gone through to achieve that beauty.” – Maya Angelou

I heard the news today. Maya Angelou died.  I was stopped in my tracks.  Her words have kept an effervescent presence in my mind. I hear her poetry.  I hear her voice reciting the many poems and speeches she’s said over the years.  I pick up one of her many books in my library.  I open it, and I read a passage.

She was just a young girl when she was raped and told her family what happened. That rapist was killed.  She told his name to the family and out of guilt she believed she caused his death. At that time she believed her words were strong enough to kill and chose not to say anything. So she stopped talking to everyone, except her brother, Bailey for 6 years.

In those silence years, God must have given her words because she became one of the greatest authors and poets of our day.

Her words of wisdom are to be honored. Her poetry and works are filled with grace and passion.  She knew what to say, how to express it, and illustrated the word picture so eloquently. She encouraged us with quotes such as, “You may encounter many defeats, but you must not be defeated.”

She was a warrior for equality and peace. In her poetry she spoke of love and hate. 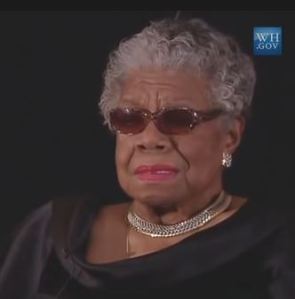 Maya Angelou was an inspiration to us all. She was the phenomenal woman she wrote about.

She authored seven autobiographies. Her first one, “I Know Why The Caged Bird Sings” was published in 1969. Her final book was released in 2013 which was also her seventh autobiography titled, “Mom & Me & Mom.”

When Nelson Mandela passed away last year, it was Maya Angelou who said, “No sun outlasts its sunset, but will rise again and bring the dawn.”  The same is true for her. Tonight the stars will shine a little brighter because one will be Maya Angelou’s.

She inspired people from all walks in life and as for this inspirational writer, I find her words syncing with my own.

She said so much in such few words like her quote, “There’s no greater agony than bearing an untold story inside you.”

She believed in justice, in peace and in love. She loved the Lord and her words of wisdom will live with us through eternity.

In her last tweet to the world a few days before her passing, she said, “Listen to yourself and in that quietude you might hear the voice of God.”

Her words are now silenced in this life but in heaven she will rise. With hope and grace, we know that in God’s arms she will find love. The love she always talked about.

She has freedom, her caged bird is now flying free in the arms of angels.

Writer at heart. With faith and understanding, the butterfly represents transformation. I'm in a season of change that has opened my soul to the beauty around me. I'm living my Faith Dream & it's amazing.
View all posts by faithdream »
« Can I skip Mother’s Day this year: I miss Mom
Dare to be Different and Achieve your Dreams »